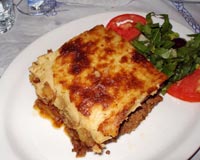 Moussaka is a popular recipe of the Middle East. Learn how to make/prepare Mussaka by following this easy recipe.

Ingredients:
How to make Moussaka: